On this page:
Licences in Poland − Baltic Sea
Licences in Lithuania
Licences in Norway – Norwegian Continental Shelf
Oil and gas reserves
Crude oil and natural gas production in 2014
Operations in 2014
Objectives for 2015
Development prospects until 2020

2014 brought many positive developments in the LOTOS Group’s upstream segment. However, it was also a time when we had to cope with the implications of the changed business environment, in particular on the global oil market. 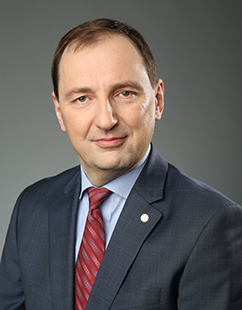 The LOTOS Group’s hydrocarbon production potential doubled last year, following the acquisition of Heimdal assets by LOTOS E&P Norge in December 2013.  In February, the ‘GSF Monitor’ rig purchased in late 2013 was deployed in the Baltic Sea. With a capacity to drill to the depth of up to 9,000 m, it is more technologically-advanced than the ‘Petrobaltic’ rig (drilling to the depth of up to 6,000 m). Longer legs make it suitable for operation in areas with water depth of up to 106 m, or even up to 120 m with extended legs. This means that we can use the rig for drilling exploration wells in all our off-shore licence areas. After quick adjustment to the operating conditions in the Baltic Sea, in the spring the new rig, named ‘LOTOS Petrobaltic’, began to drill for oil and gas.

LOTOS Petrobaltic obtained extension of its production licence for the B3 field, from which we will produce oil and gas until 2026, that is ten years longer than assumed under the previous licence and plans. We now estimate that the field will yield one million tonnes of oil more, ensuring steady revenue streams and stable financial position. All this was made possible by our employees’ expertise and experience in optimum hydrocarbon production.

In 2014, we signed an agreement with a consortium of banks and financial institutions for the financing of the development of the B8 field. Another milestone was the successful issue of Grupa LOTOS shares. A significant part of the issue proceeds are earmarked for the development of the B4 and B6 gas fields under a project executed jointly with CalEnergy, our world-class partner.

Last year, we also began onshore exploration activities. We partnered with Polskie Górnictwo Naftowe i Gazownictwo S.A. and signed an agreement on joint operations in the Górowo Iławeckie and Kamień Pomorski licence areas. Together we will carry out 2D seismic surveys.

In Norway, in 2014 LOTOS E&P Norge applied for new exploration licences in the APA 2014 licensing round, and won an interest in a licence as its operator.

The Miliana Group companies and TSM provided effective and efficient offshore logistics services to our rigs. In 2014, strong results were posted by Energobaltic, converting natural gas from the B3 field into LPG and environmentally friendly electricity and heat, which are then supplied to Władysławowo and the neighbouring towns and villages.

Since the second half of 2014, we have been operating under more challenging economic conditions. Given the rapid fall of oil prices on global markets, which started in August 2014, we made a professional assessment of our development plans and budgets, and revised them accordingly. Hydrocarbon exploration and production projects, especially on subsea deposits, are cost intensive and long-term in nature. We reviewed our projections in detail, taking into account the new economic reality and long-term forecasts, according to which oil prices may not return to pre-crisis levels in the years to come.

However, in this new environment we have made a key assumption: LOTOS will not give up investing in hydrocarbon exploration and production. This applies primarily to our strategic projects executed in the Baltic Sea, namely the development of the B8 oil field, and the B4 and B6 gas fields. The projects will be much more challenging and their implementation will require high flexibility, their scopes and deadlines may need to be adjusted to the present market situation, but we shall maintain our resolve to implement them.

Our achievements in 2014, including the ability to react quickly to the rapid changes in the economic environment, are the effect of the qualifications, commitment and hard work of employees of all LOTOS Group companies operating in the upstream segment. In difficult conditions, the value of people is put to a test. The developments in late 2014 again confirmed that people are LOTOS’ most valuable asset.

Grupa LOTOS is engaged in exploration and production through the LOTOS Petrobaltic Group in the following countries:

The Miliana Group renders sea logistics services to LOTOS Petrobaltic, including crude oil storage and transport, rescue and anti-spill assistance, geotechnical surveying, and intermediary services in organizing air transport services to the rig, using six own vessels: Icarus III tanker, multi-purpose vessels St. Barbara, Kambr and Aphrodite I, Granit and Bazalt tugboats, as well as tonnage chartered from third-party shipowners. In 2014, the services were extended to include those provided by the ‘LOTOS Petrobaltic’ rig.

Energobaltic’s business comprises management of associated gas produced from the B3 oil field and – in the future – from other hydrocarbon accumulations located in the Baltic Sea. At the Władysławowo CHP Plant, the company produces electricity, heat, LPG and natural gas condensate using associated gas from an offshore oil production facility (the B3 field).

The total area covered by the production licences spans more than 147.84 km2.

The total area covered by these exploration and appraisal licences is more than 7,300 km2.

In 2014, the company discontinued its exploration activities in the Sambia W region as there were no prospects for oil production, which resulted in the expiry of the relevant licence.

In Lithuania, LOTOS Petrobaltic conducts its activities through its subsidiary AB LOTOS Geonafta, in which it holds a 99.99% interest (1 share is held by Grupa LOTOS).

LOTOS Exploration & Production Norge AS (LOTOS E&P Norge) of Stavanger, Norway, is the subsidiary responsible for our operations on the Norwegian Continental Shelf.

As at the end of 2014, the LOTOS Petrobaltic Group’s 2P crude oil reserves totalled 6.1m tonnes and 2C resources amounted to 3.985m tonnes. In the Baltic Sea, on the Norwegian Continental Shelf and in Lithuania, 2P oil reserves were 4.9m tonnes, 0.23m tonnes and 0.98m tonnes, respectively, while 2C oil resources were 0.085m tonnes in the Baltic Sea and 3.9m tonnes on the Norwegian Continental Shelf.

The higher output was in large part attributable to the production assets on the Norwegian Continental Shelf purchased as part of the Heimdal portfolio.

Development of upstream operations has been a priority under the LOTOS Group’s Strategy for 2011−2015. Our activities in this area are focused on increasing production from own fields and improving the security of oil and gas supplies by ensuring direct access to new hydrocarbon deposits (acquisition of own resources under exploration licences and establishment of cooperation with partners that have access to oil and gas deposits). The following steps were taken in pursuance of this strategic goal in 2014:

The principal strategic goal for the exploration and production segment is to increase the production potential to 24 thousand boe (barrel of oil equivalent) daily (or 1.2m tonnes of crude oil annually) in 2015. The LOTOS Group’s plans provide for continuous expansion of operations in the Baltic Sea, the Norwegian Continental Shelf and onshore areas in Poland and Lithuania.

We plan to undertake the following key initiatives as part of our strategy:

Our key focus until 2020 will be to increase the production potential to approximately 100 thousand boe (barrel of oil equivalent) per day, or 5 million tonnes of oil per year, and to secure approximately 330 million boe of proved recoverable reserves.

In 2016–2020, the development focus will be primarily on Poland, where we plan to appraise the full production potential of the Baltic Sea assets. Concurrently, we intend to intensify our onshore activity. On international markets, we plan to build a sustainable asset portfolio and gradually boost organic growth. We are also considering intensifying production from production fields in Poland and Lithuania using the Enhanced Oil Recovery (EOR) technologies.

The development of our exploration and production segment in 2016−2020 in Poland will involve:

Key areas of focus of international expansion plans for 2016−2020 are to: