Grupa LOTOS actively supports the state policy for the energy sector. Representatives of the Company are members of expert teams appointed by the government to develop new legislative solutions for the energy sector, and actively participate in public consultation of draft acts regulating the sector. 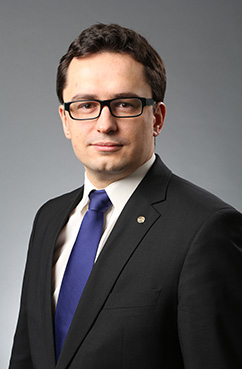 We support the Ministry of Economy, Ministry of State Treasury, Ministry of Environment and Ministry of Foreign Affairs in the organization of government and state meetings, by providing them with information and expert knowledge on the energy sector.

In 2014, representatives of Grupa LOTOS participated as experts in meetings of the Polish Parliament’s Special Committee for Energy and Energy Resources and the State Treasury Commission, where important matters concerning Poland’s oil sector were discussed. There, we had an opportunity present to the law makers the industry’s current situation and key challenges resulting from the enacted and planned EU regulations.

Grupa LOTOS monitors, on an ongoing basis, all EU regulations concerning the energy sector, and cooperates with the government on drafting documents implementing EU directives in Poland. Being a member of Central Europe Energy Partners (CEEP) and Fuels Europe, Grupa LOTOS is also able to influence the shape of the EU regulations.

In 2014, through CEEP, we supported the process of negotiation between the EU and USA of the Transatlantic Trade and Investment Partnership (TTIP). We seek free access to the North American oil and gas market, which should help EU refineries compete with those outside the EU, which have access to less expensive gas and oil.

Other issues which require our attention are the EU’s proposals to reform the Emissions Trading Scheme (ETS) and implementation of the Market Stability Reserve (MSR), which would maintain a high price of CO2 emission allowances. We have been monitoring the energy sector across Poland’s eastern border, where customers for our oil products operate (Russia, Belarus, Ukraine, Kazakhstan and Azerbaijan). We take part in the work of Intergovernmental Committees concerning countries of the region, which set out the possibilities and directions of bilateral economic cooperation.

One of the major events we participated in last year was the publication of the ‘Completing Europe - From the North-South Corridor to Energy, Transportation and Telecommunications Union’ report, drawn up by CEEP and the Atlantic Council think tank. Economic growth and energy security determine the EU’s strength. We should seek to strengthen the competitiveness of European economies through construction of adequate infrastructure that would allow Europe to successfully compete with other economies of the world.

We consider as priority the investment project concerning the creation of the North-South Corridor, i.e. an integrated network of interconnections in the energy, transport and telecommunications sectors extending from the Baltic Sea to the Adriatic and Black Seas, and linking the region with the rest of the EU.

The LOTOS Group realises its business strategy and corporate social responsibility goals by increasing its role in strengthening Poland’s energy security. With this end in mind, we carry out multiple projects aimed to increase the production of hydrocarbons and oil distillate yields, improve Poland’s fuel balance and exploit synergies between refining and the energy sector.

In 2014, we were actively involved in the efforts to strengthen the energy security through various areas of our operation.

Development of the exploration and production segment

We continued our work on development of the B8 oil field located in Poland’s Exclusive Economic Zone of the Baltic Sea with a view to launching commercial production. This project will allow us to diversify our oil supply sources. On August 25th 2014, we signed relevant agreements under the Senior Note Programme with Bank Pekao S.A. and Bank Gospodarstwa Krajowego, and under the Subordinated Note Programme with Polskie Inwestycje Rozwojowe and Bank Pekao S.A.

LOTOS Petrobaltic continued its work, carried out jointly with CalEnergy Resources Poland, on development of the B4 and B6 gas fields located in Poland’s Exclusive Economic Zone of the Baltic Sea. The project’s objective is to launch commercial production of natural gas from the fields by 2018, with a 51% share of LOTOS Petrobaltic in the production. The project will help diversify the sources of natural gas supplies to Grupa LOTOS. In 2014, the engineering design for 2015−2017 was developed and a phased launch of production from the fields (B6 and B4) was analysed.

In May 2014, LOTOS Norge and PGNiG Upstream International signed a letter of intent concerning their joint operation on the Norwegian Continental Shelf, according to which both companies are planning to jointly review possible acquisitions, acquire assets and take part in licensing rounds held by the Norwegian Petroleum and Energy Ministry.

Last year, the Heimdal field development project was at a preparatory stage to determine its most profitable scenario. Development of the hydrocarbon discoveries acquired by LOTOS Norge in the Heimdal portfolio, i.e. Fulla, Frigg Gamma Delta and Rind, will lead to increased production of hydrocarbons in the Norwegian Continental Shelf and higher revenue from foreign sales.

Development of onshore oil and gas deposits in Poland was carried out in cooperation with PGNiG. Activities in this area were focused on raising the production of hydrocarbons from conventional deposits and further diversifying the sources of feedstock supply to the Grupa LOTOS refinery. The project, carried out under the 2013 agreement between LOTOS Petrobaltic and PGNiG on joint operations in the Kamień Pomorski onshore licence area, was in the phase of exploration and appraisal, as part of which seismic surveys were performed. (See more)

In 2014, Grupa LOTOS was actively involved in promoting the policy of energy security. Activities in this area were conducted mostly through our membership in the association Fuels Europe and in Central Europe Energy Partners (CEEP).

A valuable initiative of the Ministry of Economy was to commence work on Poland’s Energy Policy until 2050. Several industry organizations, including CEEP (co-founded by Grupa LOTOS), were invited to contribute. In May 2014, during the European Economic Congress in Katowice, Grupa LOTOS and CEEP organized a panel discussion entitled ‘Single Energy Market in Europe’, to present the idea and challenges of creating on our continent a single energy market.

The issue was further investigated during a panel discussion ‘An Energy Union for Europe – Competitiveness, Growth, Security and Solidarity’, organized by CEEP and Grupa LOTOS during the Economic Forum in Krynica-Zdrój, in September 2014.

Another major European event in 2014 was the ‘29 + 1’ debate, held in April in Budapest and attended by representatives of 29 leading energy companies from Central Europe as well as the EU Commissioner for Energy. The initiative was under the auspices of Romania’s Prime Minister Victor Ponta. The idea behind the ‘29+1’ meetings is to ensure that Central European energy companies have a say in developing the EU’s joint position and policy on energy security.

Last but not least, the Energy and Economic Summit, held in November 2014 in Istanbul, Turkey, was an opportunity to present the ‘Completing Europe - From the North-South Corridor to Energy, Transportation and Telecommunications Union’ report drawn up by the Atlantic Council and CEEP.

An example of best practice which combines building our international relations with supporting initiatives aimed to improve the energy security in Europe was the publication of the ‘Completing Europe - From the North-South Corridor to Energy, Transportation and Telecommunications Union’ report.

This strategic document was drawn up thanks to the cooperation between CEEE and the Atlantic Council, with the expert input provided by Grupa LOTOS, PERN “Przyjaźń and Kulczyk Investment. The Atlantic Council was founded in the 1960s and is a special, nonpartisan American think tank committed to promoting transatlantic cooperation and international security.

The report focuses on the role of oil, gas, transportation and telecommunications interconnectors in strengthening the security of the European energy sector, improving its competitiveness and creating common energy market.

The report was first presented at the Energy and Economic Summit, held in November 2014 in Istanbul.

The document is available on the Central Europe Energy Partners’ website at www.ceep.be.

In 2015, Grupa LOTOS is planning to continue its exploration and production work. Moreover, we envisage further involvement in the work on drafting Poland’s Energy Policy until 2050 and the legislative processes (at the national and EU levels) concerning the energy sector.